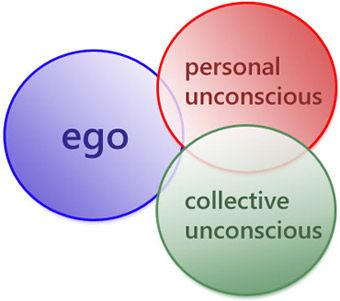 Jung’s body of work full of discussions on religion. He admits that humans are “by nature religious”. He agrees with Rudolf Otto’s understanding of religious experience as a “careful and scrupulous observation…the “numinous.” that is, a dynamic existence or effect, not caused by an arbitrary act of will.”[1] For Jung, the experience of the numinous is not bound by the creed, dogmas or institutional religion. Institutional religion is an obstacle to authentic religious experiences. The authentic religious experiences, for Jung, is “not caused by an arbitrary act of will. On the contrary, it seizes and controls the human subject”.[2] In this sense, Jung is critical of organised religion. Even though religion designates experiences in consciousness, in truth, it is a phenomenon of the collective unconscious, idea central to understanding Jung’s view on religion.

Considering its importance, I shall briefly outline what the collective unconscious is.

Jung associates consciousness with the ego, stating the role of the ego in terms of a “complex of representations which constitute the centrum of the field of consciousness”.[4]  So consciousness, for Jung, is constituted by what is perceivable and easily knowable. On the contrary, unconscious realities are difficult to be perceived, because perception is the central component of the consciousness. For this reason, everything in the personality that is not contained in the conscious should be found in the unconscious.

However, it is important to note that for Jung there are two dimensions to the unconscious. The first part personal unconscious, it contains forgotten material and subliminal impression. The personal unconscious, for Jung, contains “lost memories, painful ideas that have been repressed….subliminal perceptions, by which are meant sense-perceptions that were not strong enough to reach consciousness, and finally, contents that are not yet ripe for consciousness”.[5] Jung points out that these forgotten or repressed content often come together and create subliminal dis/functional elements, rendering fragmentary personalities. This activity of unconscious mind is what Jung calls complexes, a series of highly fuelled emotions impacting the conscious mind and producing disproportionate outcomes. According to Jung, the ego is nothing but the complex of consciousness.[6]

The second part is collective unconscious, a non-personal layer with contents belonging to the broader world. It is a deeper layer of the unconscious in contrast to what he calls the personal unconscious. In Jung’s words: “As to the man’s land which I have called the ‘personal unconscious,’ it is fairly easy to prove that its contents correspond exactly to our definition of the psychic. But – as we define ‘psychic’ – is there a psychic unconscious that is not a ‘fringe of consciousness’ and not personal?”[7]

Jung’s rhetorical question points to the non-personal part of the unconscious as well.  For Jung, this impersonal unconscious is an objective prior reality with collective features to it. He categorically employs “collective” to celebrate its universal features in contrast to individual psyche or personal unconscious. He states: “I have chosen the term ‘collective’ because this part of the unconscious is not individual but universal; in contrast to the personal psyche, it has contents and modes of behaviour that are more or less the same everywhere and in all individuals”.[8]

Against this theoretical matrix Jung articulates the importance of religion and its function for the human psyche. He posits that the collective unconscious, a deeper layer of the human psyche, is part of a shared humanity where the archetypes (religious symbols/myths/narratives, etc) are to be discovered.

The experience of the archetypes is dependent on the individual, but the archetype itself forms universal narratives and images and symbols. For Jung, these archetypes are significant in shaping religious experiences and offers a psychological framework for understanding the unconscious underpinning of the religious phenomenon.

When an individual has a religious experience, they are in fact having an experience of the collective unconscious. The religious need, Jung suggests, “longs for wholeness”, and lays hold of the images of the wholeness offered by the collective unconscious, which operates independently in the depths of the psyche, of the conscious mind. [10] The religious images, experiences, and symbols, and narratives are beyond the bounds of the conscious and are present universally across cultures in the forms of archetypes.

The archetypal images correspond to and make individuals aware of the religious needs that lay in deep inside the collective unconscious. Perhaps the most prominent concept that Jung used to express his idea of the archetypes is the concept of symbols.[11]

It is the concept of symbols that Jung works out his comprehensive views on religion. While Freud saw symbols as wish-fulfillment, for example the totem, Jung saw in symbols a creative energy that is part of the collective unconscious.[12] Jung considers archetypes as a symbolic phenomenon that point beyond itself to the unknown reality. He claims that a word or an image is symbolic “when it implies something more than its obvious and immediate meaning. It has a wider “unconscious” aspect that is never precisely defined or fully explained” and “as the mind explores the symbol, it is led to ideas that lie beyond the grasp of reason”.[13]

What Jung is saying is that religious symbols play essential role in connecting conscious to the unconscious by drawing out the incomprehensible archetypes from the depth of the psyche into awareness. Even though the individual experience may differ, dependent upon social/cultural/religious settings, but the core of these symbols however different they appear represent the same unknowable reality universally for all people.

Despite cultural and religious differences, the underlying meaning of the experience is identical as it arises out of the shared collective source and joins individuals into the archetypal existence.

Another feature of Jung’s view on religion is that he speaks of religious myth in terms of symbolic manifestation of the collective unconscious. Once again, Jung’s characterization of unconscious differs from Freud. Jung admits, “I did not reduce them to personal factors, as Freud does, but – and this seemed indicated by their very nature – I compared them with the symbols from mythology and the history of religion, in order to discover the meaning they were trying to express.”[14]  In contrast to Freud, Jung sees a therapeutic quality in religious myths and states that “myths of a religious nature can be interpreted as a sort of mental therapy for the sufferings and anxieties of mankind in general”.[15] Jung saw a connection between myth and religion. He observed that both religion and myth have transcendental qualities to them and are part of the collective unconscious that passed from generation to generation. As Jung puts it: “The material brought forward – folkloristic, mythological, or historical – serves in the first place to demonstrate the uniformity of psychic events in time and space and time”.[16]

Jung’s positive attitude towards religious myth is formed due to his understanding that myths can be a symbolic expression of the collective unconscious. They are not merely illogical primitive explanations of reality but hold symbolic value. Their “esoteric teaching….typical means of expression for the transmission of collective contents originally derived from the unconscious.”[17]

[6] As Jung points out that the ego is psychologically nothing but a complex of imaginings held together and fixed by the coenesthetic impressions……. the complex of the ego may well be set parallel with and compared to the secondary autonomous complex. See The Collective Works Of C. G. Jung,  Vol 2. Pg. 601